NORTH LAS VEGAS – After nearly running the table and scorching the back nine of magical Shadow Creek Golf Course on Friday in the second round of the CJ Cup at Shadow Creek, Xander Schauffele ran into a very large cooler.

In gambling parlance, a cooler is an unlucky sort whose presence at the tables sends bad luck to all other players. For Schauffele, making the turn turned his fortune around as the front nine cooled him off with a combination of slow play, a hot day, a couple bad bounces and a few putts that just decided not to drop.

Still, Schauffele was far from wiped out as he turned in an 8-under-par 64 to assume command of the CJ Cup at 14 under through 36 holes. His round included a 59 watch as he shot 7-under 29 on the back that included birdies on seven of the nine holes, including on the last six.

But on the front, he made a lone birdie on the seventh.

“Got a little bit stale there,” Schauffele said of the front nine. “Pace of play slowed down a lot, kind of hot, easy to let the mind wander. Upset I didn’t make more birdies but pleased I didn’t make any bogeys.

“When you shoot 29, things are flowing, things are easy, you’re not really thinking much at all. Someone asked me if I’m rusty at all (after a three-week break). I thought about it today and I think the most rusted thing is sort of my mentality. When it comes to when I play at home with my buddies, we’ll play a five‑ball in three hours, three and a half hours. So walking in a three‑ball and playing in five and a half hours, it’s a different mentality, it’s a different pace.

“So I got off to a hot start and kind of slowed down, but like I said, just happy I made that par putt on the last (from 11 feet).”

Schauffele stood three clear of the field, with first-round leader Tyrrell Hatton (68) sitting at 11 under. Russell Henley (68) was at 10 under. At 9 under was Talor Gooch (65). At 8 under were Jason Kokrak (66) and reigning PGA Championship winner Collin Morikawa (65), who was in the group with Schauffele and Viktor Hovland, who shot 66. Defending champion Justin Thomas (66) was at 6 under. 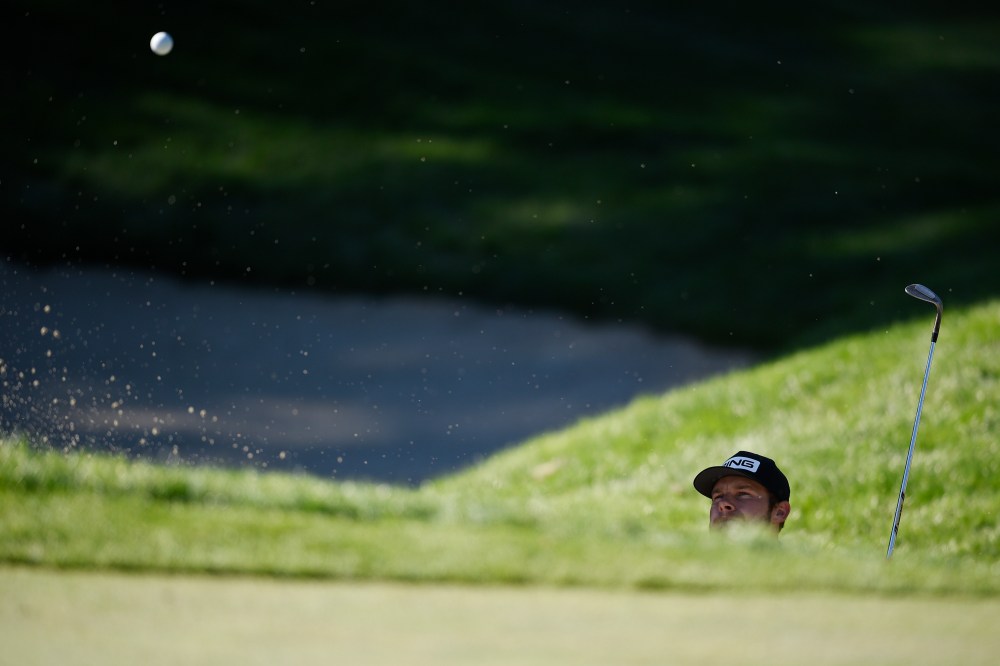 “All of us just kept making birdies,” said Morikawa, who made seven. Schauffele made eight and Hovland made five and added an eagle. Hovland’s lone bogey was the only blemish on the three scorecards.

“It was nice,” Schauffele said of back-nine run where he made three birdies from inside seven feet, knocked in others from 13, 27 and 37 feet and chipped in from 20 feet on the par-3 17th. “Some of those holes you’re not really trying to birdie them, you are kind of just trying to leave yourself an uphill 35‑footer.

“And fortunately I made a couple of them.”

Schauffele, 26, is now in prime position to win his fifth PGA Tour title and first since the 2019 Sentry Tournament of Champions. He’s usually in prime position to add to his victory total. He’s No. 8 in the world and his wins have come on some big stages – the 2017 Tour Championship, the 2018 World Golf Championships-HSBC Champions and the 2019 Sentry Tournament of Champions. He’s also finished runner-up seven times since the start of 2017, including in the 2018 Players and Open Championship and the 2019 Masters.

In his last start before heading to Las Vegas he finished fifth in the U.S. Open. Before that he had the lowest 72-hole total in the Tour Championship won by Dustin Johnson in the staggered scoring system as part of the FedEx Cup Playoffs format.

After the U.S. Open, Schauffele was in no rush to get back to the course. He didn’t touch a club for 10 days at the start of his three-week break and slowly practiced and played his way back. He wasn’t concerned about rust when he got here.

“You can do most of your homework at home. This is my fourth year, so you start to learn your own tendencies. I used to be scared to take 10 days off and in the last two years I’ve kind of started to enjoy taking some time off so when I come back I’m kind of ready and fresh to push,” he said. “I played golf with Austin (Kaiser) a few times back at home, that was kind of my only ask of him, my caddie. We played a few times and it was kind of nice to knock the rust off that way.”

Phil Mickelson trolls Tiger, CJ Cup field, as only he can