What Fowler used to win the The Deutsche Bank

Donning his signature Sunday Orange apparel, accessories and TITANTOUR footwear, and equipped with his Fly-Z+ Driver, which he bombed 341 yards on the 18th hole today, and Fly-Z PRO Irons, Fowler powered his way to a victory which catapulted him third in the FedEx Cup “Rickie has had a successful year on PGA Tour, with multiple wins, and we couldn’t be moreexcited to congratulate him on another one. He is a captivating and dynamic player, and truly excellent brand ambassador,” said Bob Philion, President & CEO, Cobra Puma Golf.

Fowler’s Puma Golf equipment helped him look good through all four rounds. His looks consisted of apparel and footwear from the 2015 Autumn/Winter collection including: TITANTOUR Footwear – Designed to be the coolest shoe in golf, the shoes helped keep Rickie cool, steady and comfortable through all four rounds. #GOTIME Blur Stripe Polo in Orange, Tech 6 Pocket Pants, Script Cool Cell Snapback Cap and Highlight Fitted Belt completed his look for Sunday. 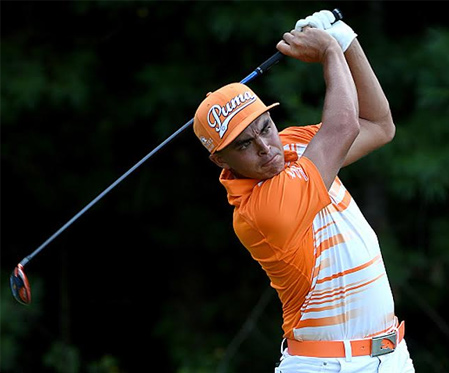