During a practice round at Muirfield, South Africa’s Ashleigh Buhai found herself pulling up a YouTube video of Ernie Els’ magnificent bunker shot on the 13th hole. Els was Buhai’s hero growing up, and she wanted to relive his greatest shot en route to victory at the British Open 20 years ago.

Buhai led by three strokes after two rounds at Woburn in 2019 and now finds herself tied with Madelene Sagstrom at 7 under, one back of leader In Gee Chun.

“It’s pretty cool to be able to play well for the first two rounds here,” said Buhai, “and try to follow in his footsteps.”

A three-time winner on the Ladies European Tour, the 33-year-old Buhai has yet to break through on the LPGA. It looked like she might set a new championship record for a links course after a front-nine 30 that included an eagle on the par-5 fifth. A disappointing par on the par-5 17th, however, followed by a bogey on the 18th, left her with a 6-under 65. Buhai said she would’ve gladly taken that score at the start of the day.

“Super chuffed with how I played today,” she said. “I stayed very patient.” 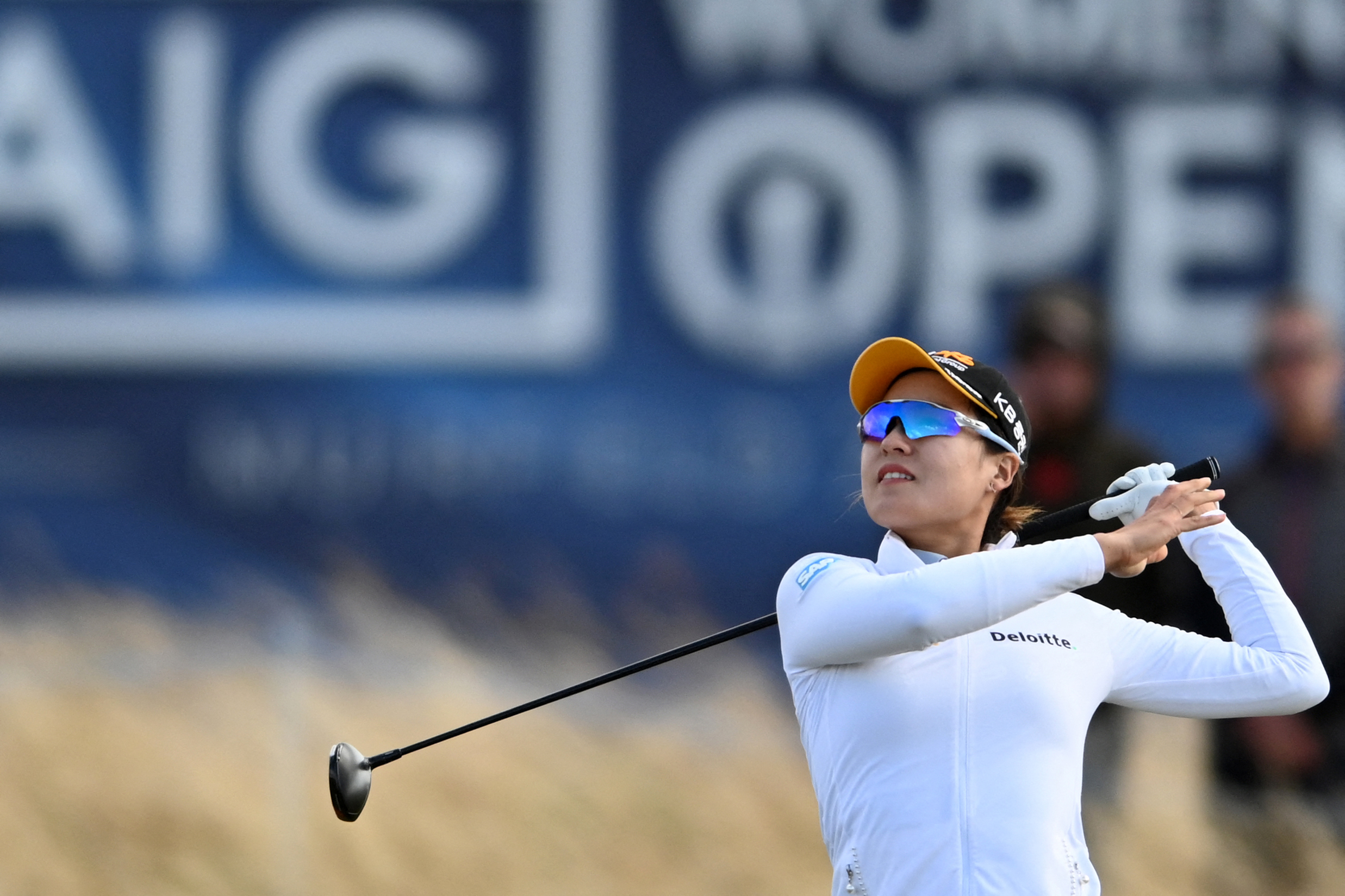 South Korea’s Chun In-gee plays a shot during her second round 66 on the second day of the 2022 Women’s British Open Golf Championship at Muirfield golf course in Gullane, Scotland, on August 5, 2022. (Photo by NEIL HANNA/AFP via Getty Images)

South Korea’s Chun recently won the KPMG Women’s PGA for her third different major title. Should she claim the AIG Women’s British, she’d have four of the five major titles, only missing the Chevron Championship (thus it would be a career grand slam in the eyes of the LPGA).

Chun shot 66 on Friday and said that a bet she had with caddie Dean Herden helped her to stay focused.

Chun has recorded one bogey each day so far but enjoys the challenge of making Herden pay.

Sagstrom, who finished runner-up last year at Carnoustie, said she has only recently begun to enjoy links golf.

“It was hate at first sight,” she said. “Mega hate at first sight. I remember particularly well we played a British Am in Wales and the weather was horrendous and I couldn’t keep the ball low to save my life. I figured it out from there. This is my sixth season as a pro, so it’s taken me a little bit of time.”

Sagstrom recorded eight birdies in her second-round 65, including a couple on the last two holes.

Speaking of coming in hot, Australia’s Hannah Green birdied four of the last five holes to rocket up the board with a 66. She’s three back with Japan’s Miyu Yamashita. 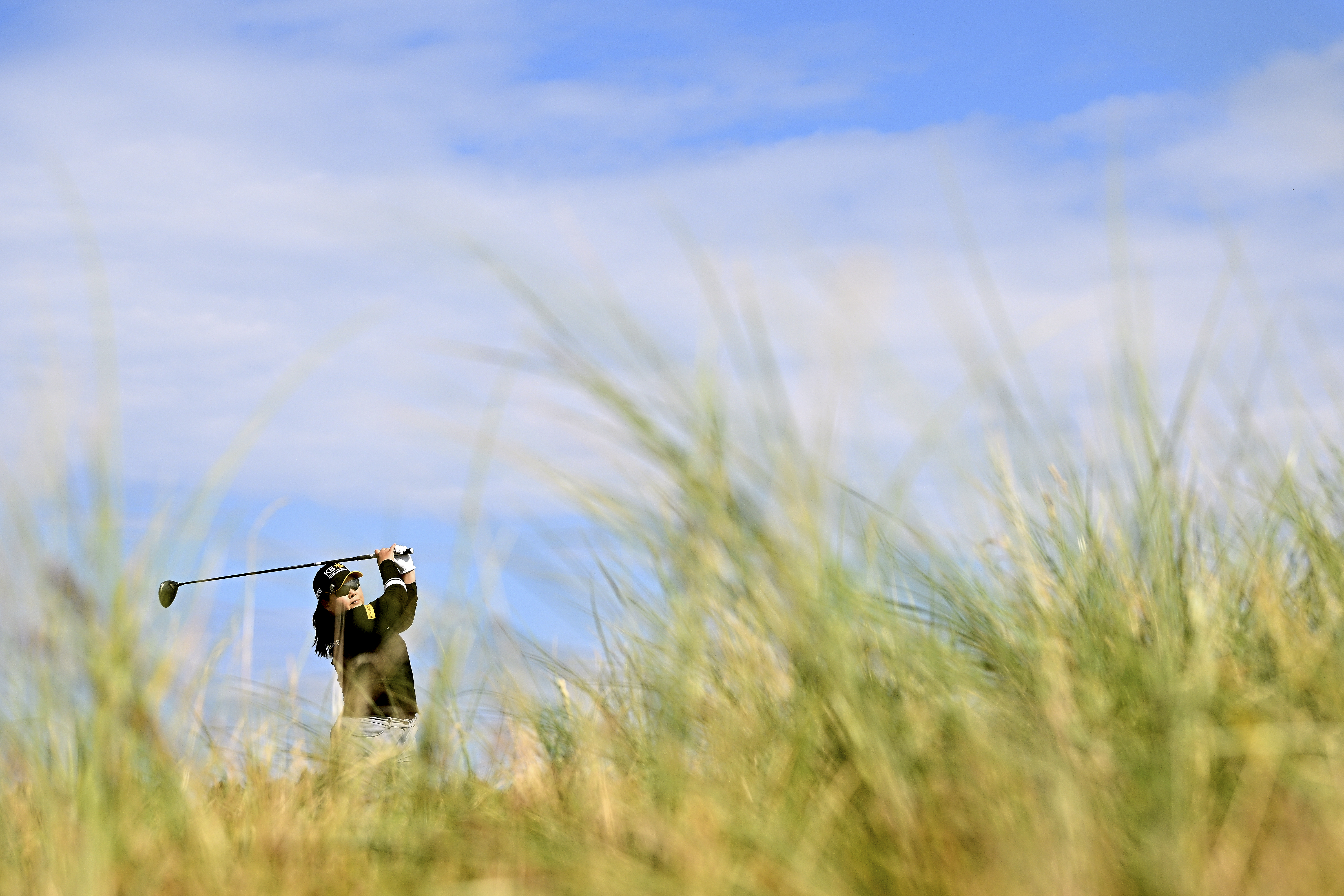 Inbee Park of Korea Republic plays her tee shot on the 12th hole during Day Two of the AIG Women’s Open at Muirfield on August 05, 2022, in Gullane, Scotland. (Photo by Octavio Passos/Getty Images)

Seven-time major winner Inbee Park is alone in fourth at 6 under. Park last won a major at the 2015 AIG Women’s British Open at Turnberry.

“Believe it or not, I’ve been striking the ball so well …  just all year this year,” said Park, “but my putter has been just not good at all. A lot of three-putts and just missing every single opportunity on the green.”

But that changed this week, which should sound the alarm for everyone within shouting distance of the lead at Muirfield.

World No. 2 Minjee Lee, winner of two of the last six majors, is four back and has a chance to move to No. 1 in the Rolex Rankings for the first time with a victory at Muirfield after Jin Young Ko missed the cut.

Lee also could rise to No. 1 with a solo-second finish, should No. 3 Nelly Korda finish solo-third or worse.