To keep his perfect resume on the PGA Tour Champions intact, Phil Mickelson will have to leapfrog another former Masters champ on Sunday and then hold off the rest of the field at the Dominion Energy Charity Classic in Richmond, Virginia.

Mickelson, who won his only other start on the senior circuit, notched seven birdies en route to a 66 during his second round on Saturday, good enough for the second spot on the leaderboard. Earlier in the day, Mickelson carded a 68 as Friday’s wet weather forced players into a Saturday marathon. A handful of players did not finish their second round on Saturday and will go off early Sunday.

While Mickelson played well, he didn’t play as well as 2003 Masters champ Mike Weir, who equaled Mickelson’s early round, but then fired a 63 in the afternoon to take a three-stroke lead into Sunday’s final round. Weir, who plays left-handed like Mickelson, stands at 13 under with 18 holes remaining.

Weir’s second round included nine birdies and no bogeys at the par-72 Country Club of Virginia.

As for Mickelson, he said he’s trying to keep the pressure on, but his failure to hit fairways kept penalizing him.

“I’m trying, man. I’m trying to attack. I’m trying to hit drivers and get after this course, but … it’s hard to do from the rough. I let a few wayward shots get away from me,” Mickelson said. “Then when I hit a great drive like on 9 and all I’ve got to do is hit a solid 3-wood on the green and kind of flail it and didn’t make birdie, so I threw away a shot there. I’ve just got to be sharper.”

Weir wanted to get off to a hot start, knowing how much golf was to be played. 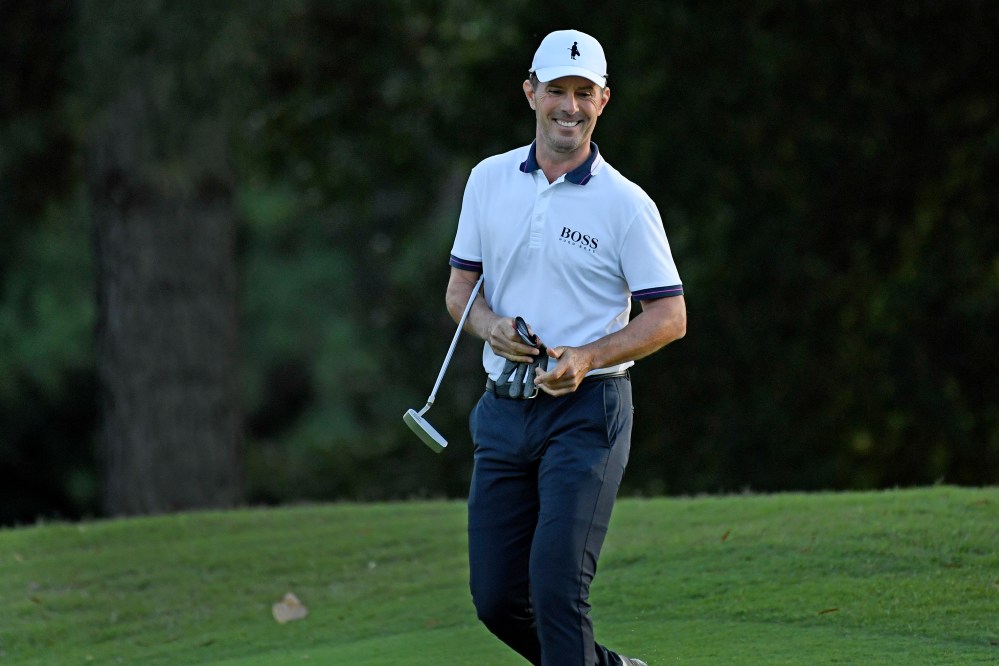 Mike Weir of Canada is all smiles on the eighth green during the second round of the Dominion Energy Charity Classic. (Photo by Tracy Wilcox/PGA TOUR via Getty Images)

“I kind of stumbled a bit on my 18th hole the first round, but maybe that gave me a jump start to just, like, not be too bothered and just say, ‘Hey, I’m playing good and let’s just keep the pedal down. Nice to see some putts going in and hit a lot of great iron shots, too.”

As for having the lead heading into the final round, Weir couldn’t recall the last time that was the case.

“It’s been a long time. It would take me a while to come up with when the last time that was,” he said.

No fans for QBE Shootout, CME Group Tour Championship due to COVID-19