But he learned on Tuesday he has another handle halfway around the world.

Turns out he’s known in South Korea as the Icon of the CJ Cup.

“That’s a cool nickname, I didn’t know that,” Thomas said.

It’s a fitting moniker. The world No. 6 won the CJ Cup two of the first three years it was contested, in 2017 and 2019. Those tournaments were held at the Nine Bridges Golf Club on Jeju Island, South Korea.

Because of the global coronavirus pandemic, however, the tournament was moved stateside, with Jason Kokrak winning last year at nearby Shadow Creek.

Thomas, who tied for 12th last year, hopes to live up to his nickname this week at The Summit Club, a stunning setting with views of the Las Vegas Strip, desert mountains and Red Rock Canyon just 10 miles from Shadow Creek.

“I wish we could be spending this time in Jeju island. I have a lot of great memories there, developed a lot of great friendships and relationships,” Thomas said. “It’s a great week. The golf course, the food, the hotel. Obviously the travel’s a little bit easier this week just coming to Vegas versus Jeju, but it’s a great tournament and it’s great to see a lot of familiar faces and hopefully we can recreate some of the good memories here in Vegas.”

Thomas makes his season debut this week, coming off a 2-1-1 record in the Ryder Cup as Team USA trounced Team Europe. He’ll do so with a new caddie – Jim “Bones” Mackay. Thomas and Jimmy Johnson, who was on the bag since 2015, split two weeks ago. It was quite a run for the two, with Thomas winning 13 titles, including the 2017 PGA Championship and the 2021 Players Championship. He was the PGA Tour’s player of the year in 2017 and won the FedEx Cup. 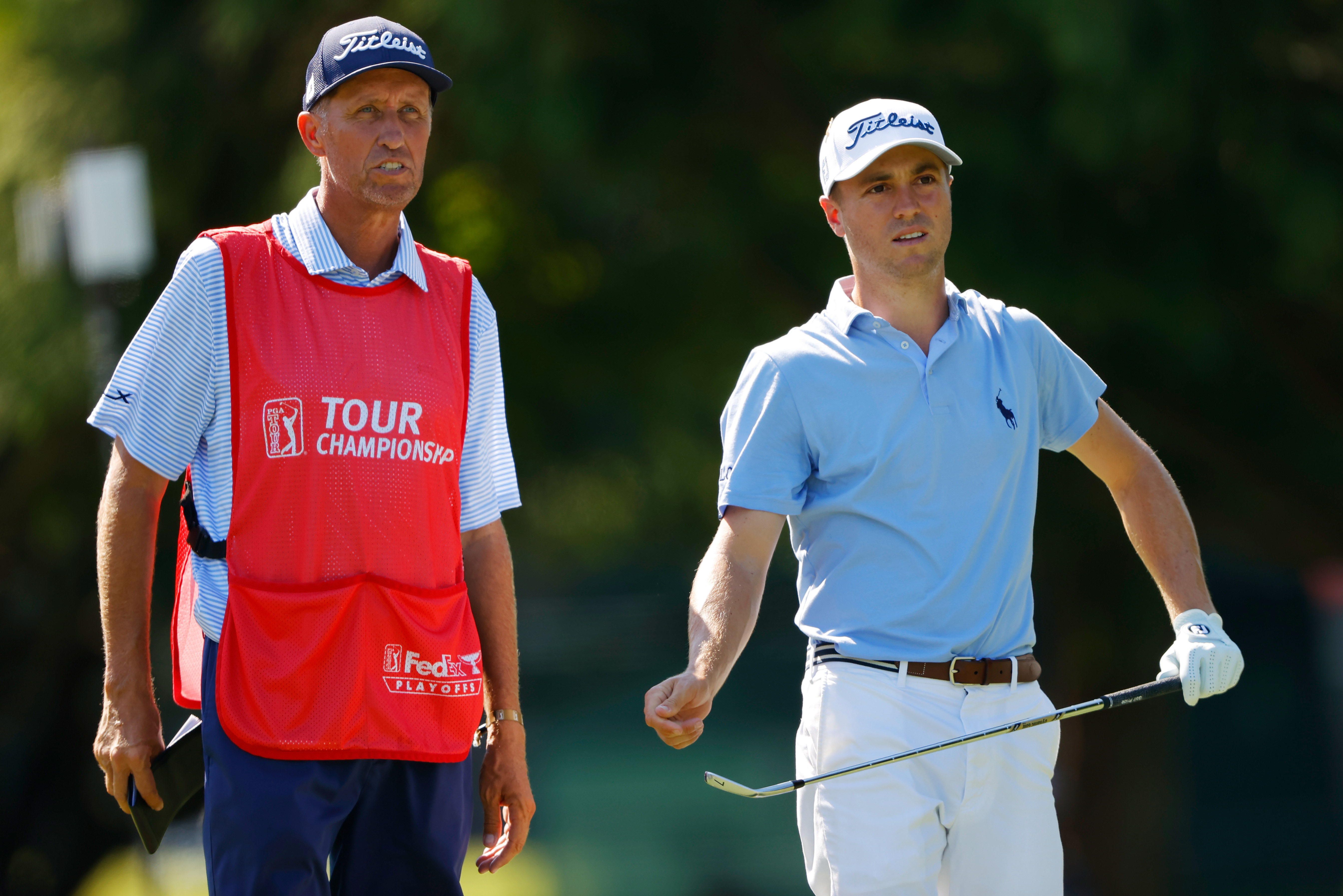 Justin Thomas talks with his caddie Jim “Bones” Mackay on the 11th tee during the final round of the 2020 Tour Championship at East Lake Golf Club. (Photo by Sam Greenwood/Getty Images)

Mackay, who spent 25 years as Phil Mickelson’s caddie before joining NBC Sports as an on-course commentator in 2017 and will continue in the broadcast world on a limited basis, has worked with Thomas before when Johnson was injured or ill. Thomas won the 2020 WGC-FedEx St. Jude Invitational with Mackay on the bag.

Still, there will be an adjustment period to deal with between Thomas and Mackay.

“Obviously I’m comfortable right now and I think he’s comfortable now, but I’m sure as more and more events go on, like anything, you just get better and better. At least that’s the hope,” Thomas said. “I think that’s the exciting part about it is that we’re already very confident, I feel like we can do a lot of great things, but at the same time we’re just going to continue to learn and know each other better and better and hopefully get more comfortable.

“We’re going to learn about each other as we go on. I think we’re both very excited and looking forward to that.”

While it’s hard to say Thomas is looking to put last season behind him, seeing as he won the Players, he wasn’t thrilled with the campaign. After racking up 11 wins and 22 top-10 finishes in four seasons, Thomas won once and had only four other top-10s last season. Two of those top-10s, however, came in his last three starts.

“Last year was an up‑and‑down year,” he said. “Wasn’t showing the consistency that I feel like I could or just kind of finishing off tournaments how I felt like I could. I was close to playing well for a while, but just wasn’t really able to get much result‑wise out of it.

“I really feel like I kind of found some good stuff there at the end of the season and into the playoffs to where I started playing a little bit better, and hopefully we’ll be able to take some of that into this fall and into the 2021‑22 season.”