Fourteen months ago, a 656-foot cargo ship named Golden Ray capsized in St. Simons Sound off the coast of Georgia.

The ship started listing soon after leaving port in Brunswick, Georgia, and didn’t get very far before tipping sideways, jostling its cargo of 4,200 vehicles, which today remain inside the ship. The crew were all rescued, but the ship has been stuck on its port side – just off the coast near the resort and golf courses at Sea Island – for more than a year.

Throughout the week of the RSM Classic in November 2019, the behemoth was the talk of the town. “That is the second most popular question I’ve been asked after ‘Can I get a parking pass?’” Davis Love III, host of his hometown PGA Tour event that supports his Davis Love III Foundation, said a year ago.

Crews previously pumped out more than 317,000 gallons of oil from the ship in an effort to stem environmental damage. A quarter of the ship is in sand more than 20 feet deep, meaning it couldn’t be turned upright without breaking apart.

This week the Golden Ray is still visible from the Seaside Course at the Sea Island Resort, home to the RSM Classic.

The removal process suffered through various delays due to a busy hurricane season, several coronavirus infections among members of the salvage team and an engineering problem dealing with how to anchor the crane. 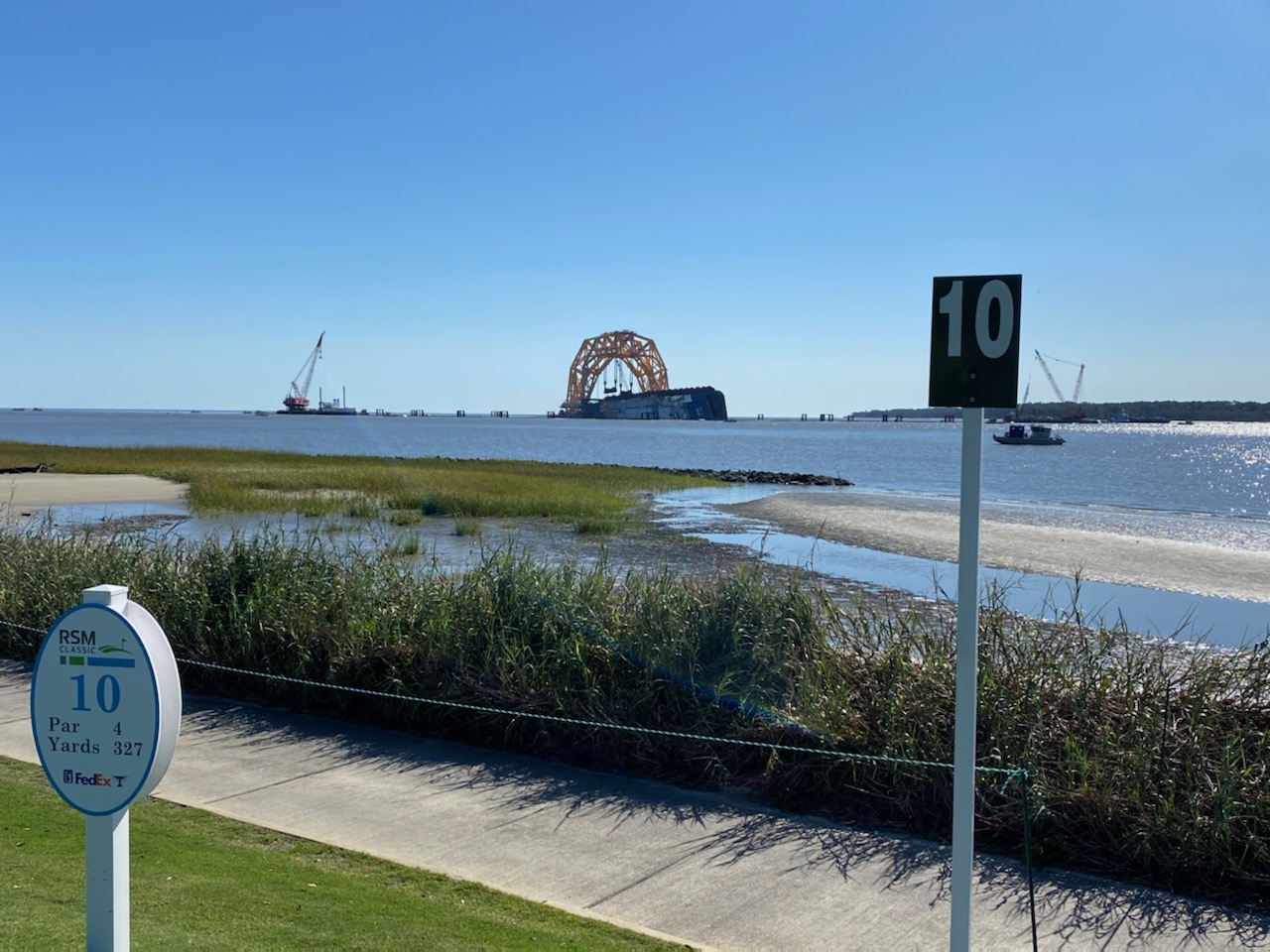 The Golden Ray cargo ship off the coast of Georgia is visible to golfers at the RSM Classic in St. Simons Island, Georgia. (Adam Schupak/Golfweek)

But two weeks ago, cutting and lifting operations on the Golden Ray wreck began.

David Minshew has lived in the area for about 20 years.

“It’s become a tourist attraction,” he told First Coast News. “There’s a lot of people coming to look at it because it’s not every day you see a ship overturned. To me, it’s an eyesore.”

The heavy-lift vessel VB 10,000, essentially a floating crane, is straddling the Golden Ray. The 225-feet-tall VB 10,000 almost looks like a rollercoaster in the water, its crew cutting and lifting the wreck into eight sections. Those sections will be placed on barges and dry docks inside a protective barrier.

The VB 10,000 is the largest floating crane sailing under a U.S. flag, according to the Associated Press. It can lift loads of up to 7,500 tons.

The Georgia Department of Natural Resources has a livestream of the work being done.

Savannahnow.com, part of the USA TODAY Network, contributed to this article.