We currently have 140 871 registered golfers on the system. Sadly, that’s down 3,7% on the previous year’s numbers.

Of all registered golfers, 29,7% fall into the 35-49 age bracket – the largest age category. Unfortunately only 3,9% of our golfers are juniors from the 0-18 age group category.

465 is the number of golf clubs we have in South Africa. 86 of these are found in KwaZulu-Natal, which is by far the most of any provincial union.

347 is the record for the most rounds played by an individual in 2016. There is, however, no word on the gentleman from Gauteng North’s marital status.

Despite the best efforts of certain players from Gauteng North, Central Gauteng remained the busiest union, racking up an impressive 599 930 rounds. Western Province was second on 482 728, with KwaZulu-Natal not far behind on 468 149.

Central Gauteng also has the most registered players, with 24 680, while Northern Cape has the fewest, at only 2 225 registered golfers.

Predictably, December was the busiest month for golfers, with 339 758 rounds recorded, followed by January, March and then April. September was the quietest month, with 267 764 rounds – perhaps due to all the Spring treatments going on.

In total, 140 348 scores were entered on the HNA mobile app in the month of December, comfortably the highest on any platform in 2016. The number of mobile app scores entered crossed one million for the year.

7 clubs registered more than 40 000 rounds of golf last year. Of those, five were 36-hole facilities, with the top two 18-hole facilities from the Western Cape.

Have You Tried The HNA Handicaps GPS App?

The new GPS integration into our HNA Handicaps App is proving to be very popular with South African golfers, as it provides accurate 3D hole maps and precise distance indicators while you are on the course.

We have a free trial version for you to test out – loaded with the first three holes of most courses in the country. If you like it and want the full 18-hole version, you can upgrade for as little as R139.99. 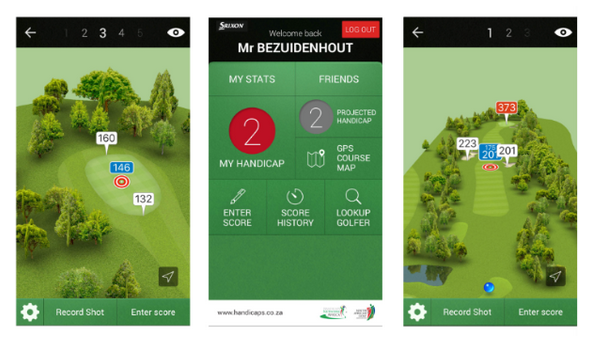 The GPS App is available on Apple iOS only.

‘Golf is the infallible test. The man who can go into a patch of rough alone, with the knowledge that only God is watching him, and play his ball where it lies, is the man who will serve you faithfully and well.’ ~ the Oldest Member, from PG Wodehouse’s The Clicking of Cuthbert