Four lucky winners were treated to a once-in-a-lifetime experience after their names were drawn in the recent Emirates Play With The Pros competition.

Charl van der Walt and Zain Asmal teed it up alongside European Tour professionals in the Nedbank Golf Challenge Pro-Am at Sun City, while Dr Rabie Barnardt and Anthony Heiss teed it up in the SA Open Pro-Am at Soweto Country Club. All four were also custom-fitted with a brand new Srixon driver.

Here’s what the four had to say about their wonderful prize.

“It was an amazing experience. I played with (former SA open champion) Richie Ramsay and two friendly guys, Morne and Sadiq, who I will have a follow-up game with at Silver Lakes early in December. Richie was very friendly and gave us some useful tips along the way, especially on putting on the fast greens. He actually played an excellent round and was something like 4 or 5 under for the day. Our team managed to get to 23 under par and missed fourth place by one point.

“It was a treat from start to finish – the Cascades was great, the Championship Dinner was an experience in getting to see the pros close up. I even got to meet with Ernie Els and Gary Player. The Thursday experience in the Emirates tent was also quite a treat.

“Srixon did a great job in fitting the driver. The fitting itself took about 30 minutes, during which time I tested various lofts and shafts. It seems as if I could get about 7 metres further carry and 15 metres further roll than my current driver. I did struggle a bit on direction at the golf course, but it will come right in time.

“Thanks again to Emirates – this experience ranks right up there with some of the best.”

Charl and his wife with Ernie Els at the Champions Dinner

“It was a memorable experience and a lot to take in, as it was my first exposure to an event of such stature. The field was fantastic as Nedbank has really attracted many of the top players in the world. The Champions Dinner was a real treat; however, my highlight was playing alongside one of my golfing favourites, Rafa Cabrera-Bello . . . what a guy.

“We got on like a house on fire and it was like a Spanish affair on the course! A fantastic course, it’s one of those places you always look forward to going back to no matter how many times you have been there before.

“The greens rolled so true and were the fastest I have ever played on. Rafa shot 3 under and it was a true golfing exhibition.

“Unfortunately, we didn’t do great in the team event as the other 2 ammies that were paired in my team didn’t have official handicaps and thus played of scratch.

“I really enjoyed the experience playing alongside Rafa and being inside the ropes. Rafa’s caddy Collin was amazing; a very friendly guy who shared a lot of his experiences on tour. I must say I was in love with the sound of Rafa’s clubface and his short game is amazing – it reminds me of the great Seve Ballesteros.

“Thank you to HNA and Emirates for one of the best experiences in my life.” 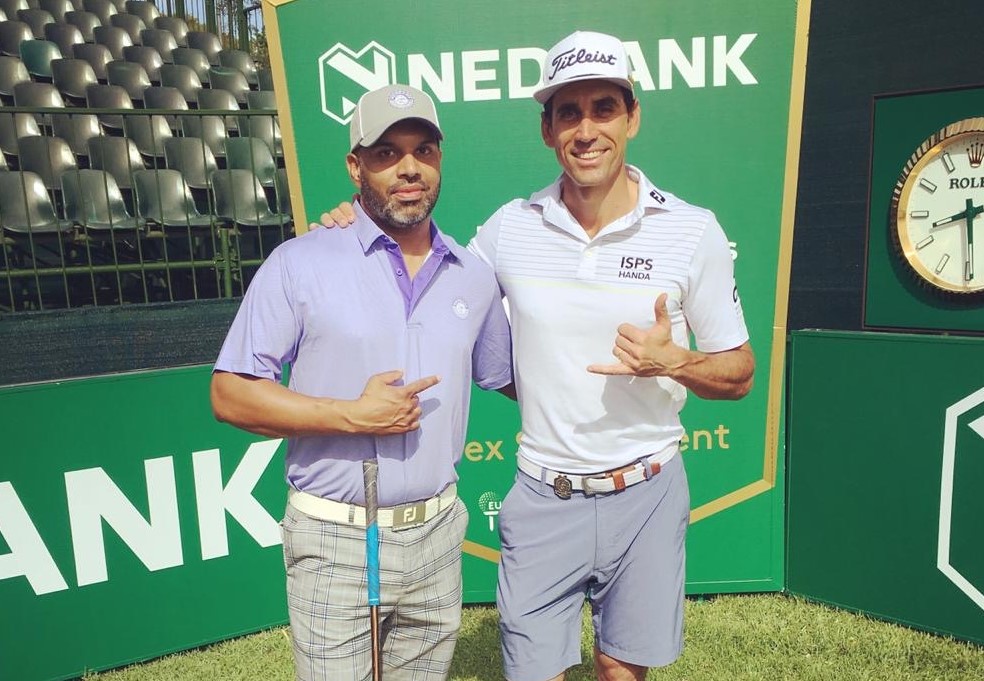 “It was a great experience being able to play in the 2020 SA Open Pro-Am. I played with Allister de Kock and two great partners, Izak and Anthony, and although we were not on our A-game, we finished 2 points from tied third on a very difficult but very impressive Soweto Country Club. The prize-giving and dinner at the Hilton Hotel was fantastic with great food and King Louis 57 red wine tasting as smooth as his swing!

“Staying at the City Lodge Hotel in Sandton was very enjoyable. Darryll from Srixon was very accommodating in meeting me halfway at Potchefstroom Golf Club to do the driver fitting, and I am hitting my Srixon driver better every day!

“Thank you for GolfRSA, HNA and Emirates for a memorable experience.”

“Once again thank you for the most amazing golfing experience. I would like to thank Emirates and Handicaps Network Africa for the once-in-a-lifetime opportunity. It was amazing to play with the pros and see just how good they really are.

“Thanks also to Srixon for the new driver, which I look forward to using.”