Beware: World No. 1 Dustin Johnson dialed in at Congaree just in time for U.S. Open

Just in time for next week’s U.S. Open, Dustin Johnson is getting dialed in.

Shaking off recent struggles, the world No. 1 turned in a bogey-free, 6-under-par 65 Thursday to plant himself on the first page of the leaderboard after the first round of the Palmetto Championship at Congaree.

The scary part is his scorecard didn’t include a single birdie on the three par-5s, and he missed two birdie putts inside 8 feet. And his peers should take notice: the last time Johnson opened with a 65 or better on the PGA Tour, he won the Masters. In all, he’s won five of 16 times on Tour when opening with a 65 or better.

“I felt like I’ve been swinging well for a while now, just haven’t really seen the results or seen the scores,” Johnson said. “I made a few putts. I just played solid golf, finally put a round together.”

He’s had a hard time putting anything together this year. His lone top 10 on Tour came back in February and in his other seven starts, he finished north of 45th three times and missed two cuts, including in his most recent start in the PGA Championship at Kiawah Island.

But in one seven-hole stretch in the first round, he hit every approach to within 11 feet. He found 10 of 14 fairways and ended his day by chipping in for birdie from 81 feet.

@DJohnsonPGA holes it for birdie and a share of the lead. pic.twitter.com/vFcCepaZSa

“It was OK,” he said about his putting. “The greens are kind of tricky to read. I missed a short one there on the par-3 5th. But I hit the putt right where I wanted to, it just broke hard right and I didn’t see that in the putt. I’m happy with the way I rolled it. Obviously 6 under was a good score, but I still missed quite a few short makeable putts.

“The putting’s been off or it’s just like small little mistakes that you shouldn’t make, so sometimes it’s taken a little bit of time away and kind of clearing my head and definitely it helps. Put in a lot of good work last week and I feel like I’m swinging good, so if I can keep the putter rolling it’s going to be a fun week.”

In photos: Dustin Johnson, Paulina Gretzky and family, through the years 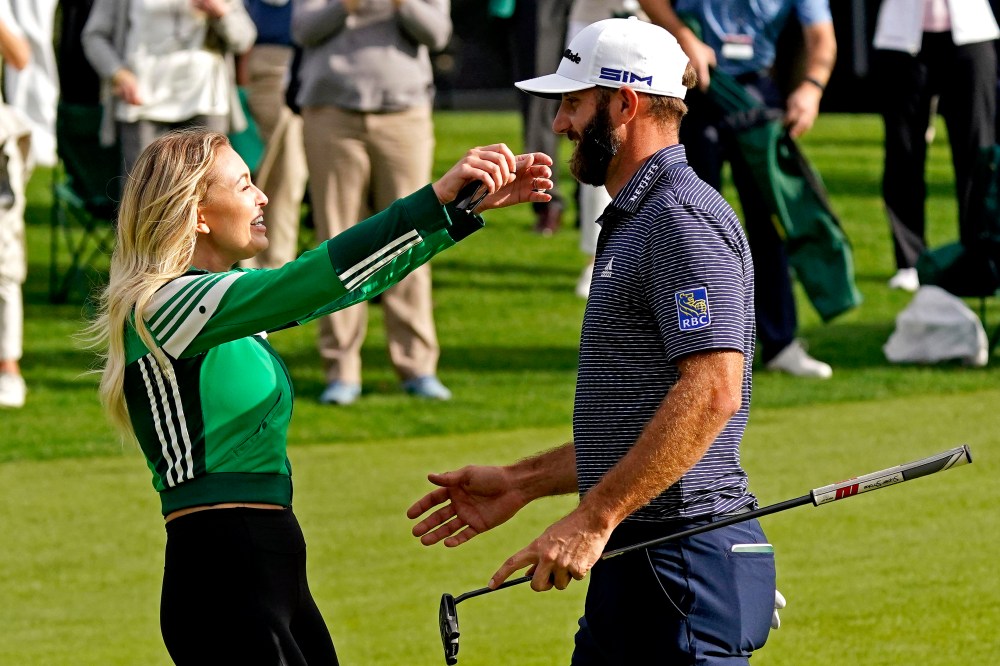 Johnson stood one shot out of the lead set by journeyman Wes Roach, who was 4 under after 4 holes and made just one bogey en route to a 64, just one shot off his career low on the PGA Tour. It is the first outright lead Roach has ever held after any round in his 88 starts on Tour.

“It feels great,” Roach said of the first lead of his career. His best career finish on Tour is a tie for third in the 2019 Rocket Mortgage Classic. “Hard work paying off a little bit. It’s just 18 holes and there’s a long ways to go, but I’m just going to do my best to stay present out there and just continue to hit quality shots.

“I’ve been hitting the ball pretty well for the majority of the year and my putter has just, it wasn’t very good, to be honest. So kind of mixed things up a little bit a few weeks ago back home and everything’s in a good spot right now.”

Joining Johnson at 65 were Chesson Hadley, Erik van Rooyen and Doc Redman, who tied for 42nd in last week’s Memorial and then started this week by withdrawing from the U.S. Open final qualifier in Columbus, Ohio, in his first round. Turns out it was the best thing for him.

“I played 10 holes and then decided I had enough. We had a long rain delay and I was just ready to get home,” Redman said. “I spent Tuesday at home and then drove up Wednesday morning, which is what I needed. Memorial is such a long, hot, brutal week and I played really well the last three days there and so I was just trying to keep that going into this week and play well.

“It’s just been a lot of hard work the past few weeks. I know I’ve been playing well and it’s a pretty cool golf course. I was able to hit some good shots and make some putts and just kind of next thing I know it was kind of going well.”

At 66 was Jhonattan Vegas. In a group at 67 were Patrick Rodgers and Harris English. In a large group at 68 was Tommy Fleetwood, Ian Poulter and Wilco Neinaber, who is making his PGA Tour debut and is one of the longest players in the game.

World No. 8 Brooks Koepka, playing for the first time since finishing in a tie for second in the PGA Championship, birdied the last to shoot 72. The last four times he failed to break par in the first round of a PGA Tour event he missed the cut.